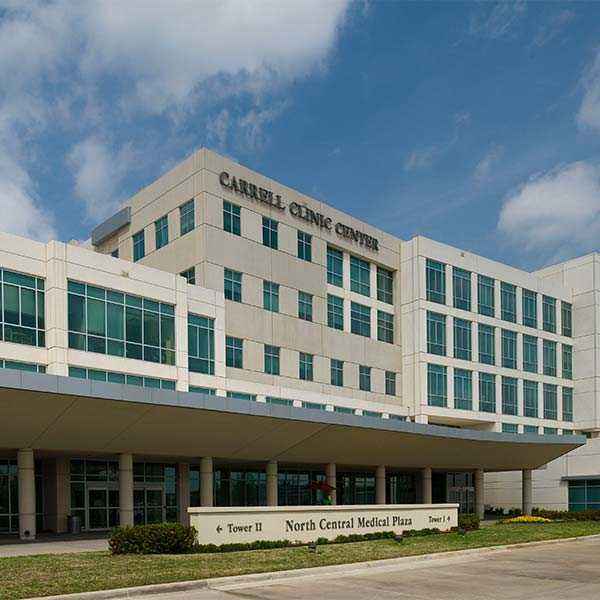 About The Carrell Clinic

A Center of Excellence in Orthopedics & Sports Medicine
The physicians and entire staff of the Carrell Clinic would like to take this opportunity to welcome you. We offer a broad range of comprehensive orthopedic care. Each physician is skilled in one or more special interest areas, such as pediatric orthopedics, sports injuries, arthroscopy, as well as disorders of individual regions such as the spine, shoulder, elbow, hip, knee, foot and ankle. All of our physicians are fully trained in general orthopedics and are board certified. This special blend of sub-specialties provides patients with immediate access to services with experts in the major areas of orthopedic care.

William Beall Carrell, MD and Percy M. Girard, MD established the Carrell-Girard Clinic in Dallas in the early 1920s. The orthopedic clinic was initially located at 3701 Maple Avenue. In addition to general orthopedics, Dr. Carrell developed a deep concern for children with orthopedic deformities. He quickly became the driving force behind a campaign for a crippled children’s hospital in Dallas. His dream was realized in 1922 when the Texas Scottish Rite Hospital for Crippled Children was built adjacent to the Clinic.

A Professional Team of Experts

After World War II, Dr. Girard relocated his practice and the Clinic became the W. B. Carrell Clinic. Dr. Carrell continued his practice at the Clinic until his death in 1944. The Clinic remained at the Maple Avenue location until 1963 when a new building was built at 2828 Lemmon Avenue. The new clinic was renamed the W. B. Carrell Memorial Clinic, in honor of Dr. Carrell. As the years passed, the Clinic continued to expand its services. Physicians with various areas of orthopedic expertise were added to the staff. In 1985 a new site was built at 2909 Lemmon Avenue and Oak Grove. With the growth of the Carrell Clinic, a second satellite office was opened in December 1993 adjacent to the Presbyterian Hospital of Dallas on 8230 Walnut Hill Lane. In October of 2005 we closed our two locations on Lemmon & Walnut Hill Lane and moved our clinic to our new building, the Carrell Clinic Center at 9301 North Central Expressway. The new location houses not only our clinical and administrative operations, but also a state-of-the-art imaging department, pharmacy, orthotics department, fully staffed physical therapy department and numerous other specialists in the field of musculoskeletal medicine. This facility offers a one stop approach for orthopedic patients, attempting to meet all of their needs in medical care.

The Carrell Clinic enjoys a tradition of excellence in patient care. Our reputation was established by W. B. Carrell and the physicians who worked with him. They were keenly aware that maintaining excellence required keeping up-to-date with advancements in both technology and skill. That commitment, established early in our history, continues to be our philosophy. Today, the Clinic is well respected throughout the southwest, and the nation, for these standards. We are indebted to Dr. Carrell-and the physicians who came after him-for the groundwork they laid, and we are dedicated to continuing this tradition.

Striving for Excellence in Patient Care

The Carrell Clinic staff consists of physicians, nurses, x-ray technicians, cast technicians and support personnel who have chosen careers in orthopedics. As a team, we are devoted to providing the best care possible to meet your individual orthopedic needs. If you have questions about any of our services, please let us know. We will be happy to help you.